Somewhere Over the Separation Barrier 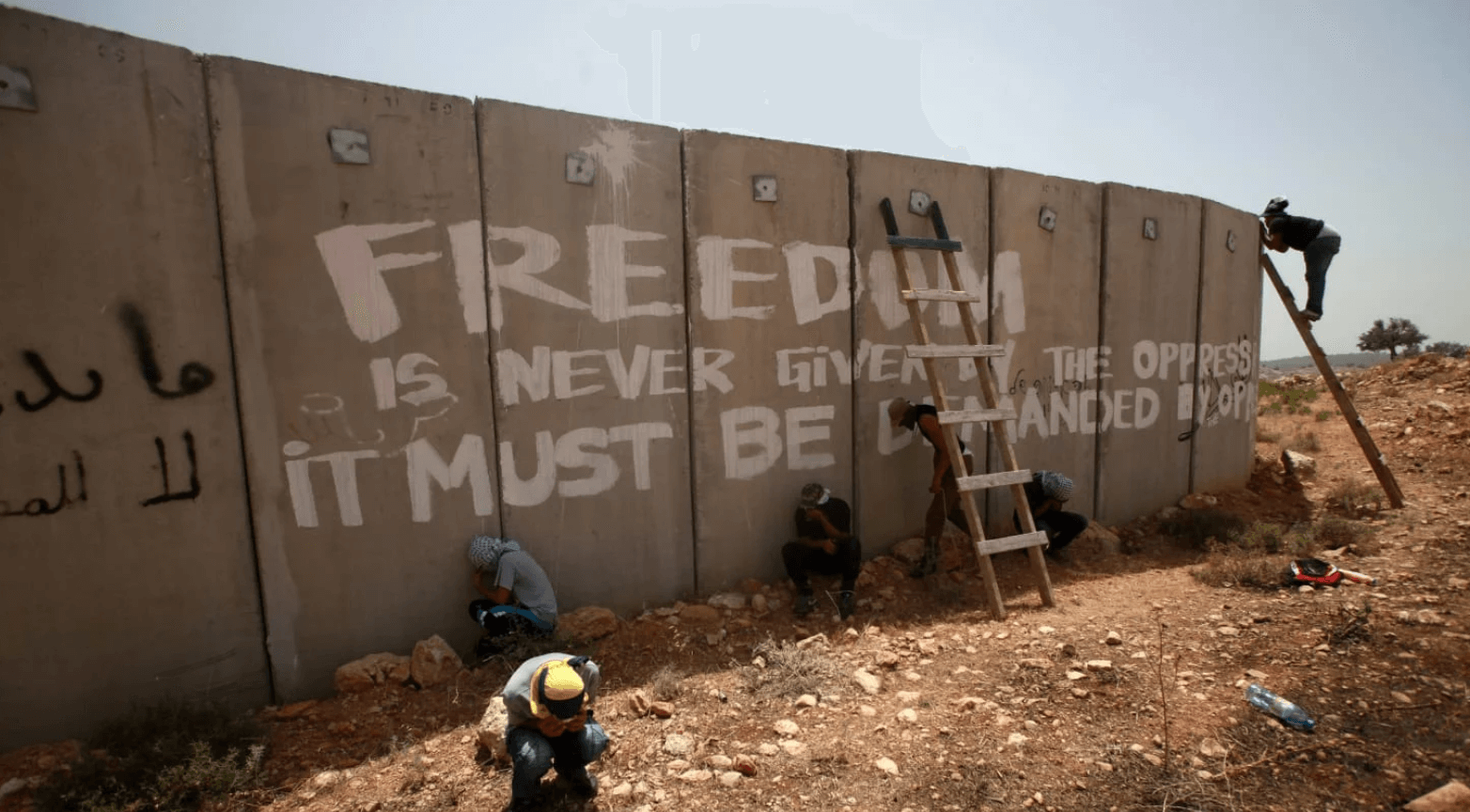 I tweet too much. When tweeps follow me, I immediately warn them that I am super annoying and won’t take it personally if they unfollow me for flooding their feed. My addiction to expressing myself in 140 characters finally paid off when a random tweet I posted about wanting to be POTUS’ s tour guide in the Holy Land landed me a writing gig at The Daily Beast. On March 20, 2013, my first piece was posted. Nine months later, to the day, the section I was chosen to write for, Open Zion, is closing. This is my final column for OZ and I’d like to dedicate it to the topic I have been avoiding since day one: why I support one secular state and why doing so does not make me anti-Semitic, delusional, or genocidal.

I was born and raised in the great state of New Jersey. As children, we were taught that everybody was equal, regardless of faith, race, ethnicity, and ability. Sexual orientation had not come out of the closet yet, but in my neck of the woods we all got along. I am not naïve and I do realize that racism is alive and well in the United States of America. I am also fully aware that when segregation ended, we didn’t all live happily ever after. No one can convince me, however, that life in America would be better if blacks and whites had stayed separate and unequal. I did not live through the civil rights struggle, but the situation in Palestine mirrors everything I have learned about it secondhand. Millions of Palestinians and Israelis already co-exist and the theory that they need to be separated or else the Palestinians will push the Israelis into the sea is nothing but fearmongering. Palestinians build the illegal settlements. They work in Israeli supermarkets and gas stations.

In my articles for Open Zion I have written about Stephen Hawking joining the BDS movement and becoming the academic boycott’s poster child. The BDS movement has made great strides—especially with its latest victory, the American Studies Association’s decision to endorse the academic boycott of Israel. However, Palestinian villagers are still shopping at settler-owned Rami Levy stores. Rami Levy is the Walmart of the West Bank and while BDS advocates abroad shun Sabra brand hummus, Palestinians shopping at Rami Levy just can’t say “no” to a great bargain. Instead of pushing Netanyahu and the Knesset to implement a settlement freeze, we should instead implore the refugees building the settlements for slave wages to go on strike. This would freeze the settlements by bringing construction to a grinding halt.

Unfortunately, the billions of dollars in aid money that Kerry has promised to the PLO is not being used to create jobs. A Palestinian father of five that can’t find any other work will continue to build settlements on Palestinian land that neither he nor his children are allowed to live in, simply in order to put bread on the table.

Whenever I mentioned one state on the pages of Open Zion, some flying monkey in the comment section or a troll on Twitter would accuse me of being a genocidal anti-Semite or a Zionist-loving normalizer. I do not understand what makes anyone think that a call for equal rights for all people living between the river and the sea means anything other than equal rights for all. At least one commenter asks, “What about the suicide bombers?”

Like a broken record, I will repeat: I condemn the use of violence against civilians by anyone at any time. Suicide bombings are not mainstream. They are the lunatic fringe minority, much like school shootings in America. Out of the millions of Palestinians living in the territories, less than 150 committed this unthinkable crime and every other Palestinian living in the vicinity has been collectively punished for the past decade because of it. Five years have passed since the last suicide bombing, but only a few days since an IDF sniper guarding an illegal Israeli settlement in the West Bank shot and killed an unarmed Palestinian kid. Soldiers, settlers, and bulldozer drivers have also mercilessly targeted civilians. Israel cannot claim that every single child they have killed was an accident when their soldiers are posting pictures on Facebook of Palestinian children in the crosshairs of their rifles’ scopes.

In discussing one state, I am often asked, “What about Gaza?” Gaza has long been forgotten. Due to the Israeli blockade, and the Palestinian Authority’s apathy, fuel shortages have caused Gaza to descend into darkness. They are only receiving three hours of power a day, and while gorgeous pictures of Jerusalem blanketed in snow are popping up all over Instagram, the Palestinians in Gaza are freezing and wading through raw sewage. Those who remember Gaza have reduced it to Hamas’s playground, ignoring the fact that the movement’s popularity is practically non-existent. The masses suffering in Gaza are as fed up with Hamas as they are with Fatah, since neither party seems to be doing anything to end the decades-long Israeli oppression they have had to endure generation after generation.

When I call for one state, I’m told it is impossible because there would no longer be a Jewish state. I don’t know how many times I can explain that being a secular state with equal rights does not deny the Jewish people their identity or a safe haven. It is time to live in the present. Neither Israel nor Palestine has a constitution. As one state they could create one that allows any Jewish person worldwide to come live there as they do now. There is more than enough room for the refugees that want return and the Jews worldwide who want to make aliyah. The fear that allowing the refugees to return will ensure the persecution of the Jewish population and the return of the Caliphate is absurd. Palestinians are Christian, Muslims, atheist, Buddhist—you name it. And the majority I know have nothing against Judaism and everything against Israeli oppression. Under democratic law, extremists of any stripe will have to live in a country where you do not discriminate against your neighbors or, if you do, you do so hiding behind a sock puppet on social media.

Many will say, “But one state denies Israel’s right to self-determination.” I’ve looked up the term self-determination and still don’t see how equality infringes upon it. If your right to self-determination means denying the lion’s share of the indigenous population equal rights then it is not an internationally recognized human right. Giving one group superior status makes all other citizens second class. We have already witnessed the rampant discrimination faced by non-Jewish Israeli citizens when it comes to family reunification, finding jobs or housing, and practicing their faiths. A secular state that protects all faiths would be a true democracy, as opposed to the current state which has codified bigotry.

I am miffed that Open Zion will not be around for me to mock what comes of the Kerry-helmed peace talks. Just today, the leakerazzi mentioned that the U.S. was trying to force a framework on the parties that would allow Israel to continue to control all access between Jordan and the future fictitious State of Palestine for at least a decade. The United States needs to stop putting Israel’s wants above Palestinian rights. Although I’m an ardent one-stater, I will not object to two states if the majority of Palestinians vote yes on the referendum that Abbas, who has not managed to hold elections in half a decade, promises will take place if any agreement on a two state solution between Palestine and Israel is brokered.

I sincerely do not believe you can separate these Semites. Where will the borders be? Who controls the air and the water? Will the extremist Israelis, who storm the Al Aqsa compound in the Old City daily, ever agree to a divided Jerusalem? Will the over 1 million Palestinians who carry Israeli citizenship finally be treated equally in the Jewish state? What makes more sense is to tear down the wall, desegregate and disarm the settlements, and allow each person a vote and equal protection under the law, regardless of faith, ethnicity, race, gender, disability and, since it’s almost 2014, sexual orientation, too. Whoever doesn’t like it can move to Saudi Arabia. I am not saying that the American way of life is perfect. I’m saying that trying to separate millions of people, who live on top of each other, based on whatever fairytale they follow or whatever tribe they belong to, is a social experiment bound to fail. One secular state with equal rights for all is the only just solution.

You may say I’m a dreamer, but I’m not the only one. It’s now time for me to click the heels of my ruby slippers together and say goodbye to OZ. It’s been real. Try not to kill each other.