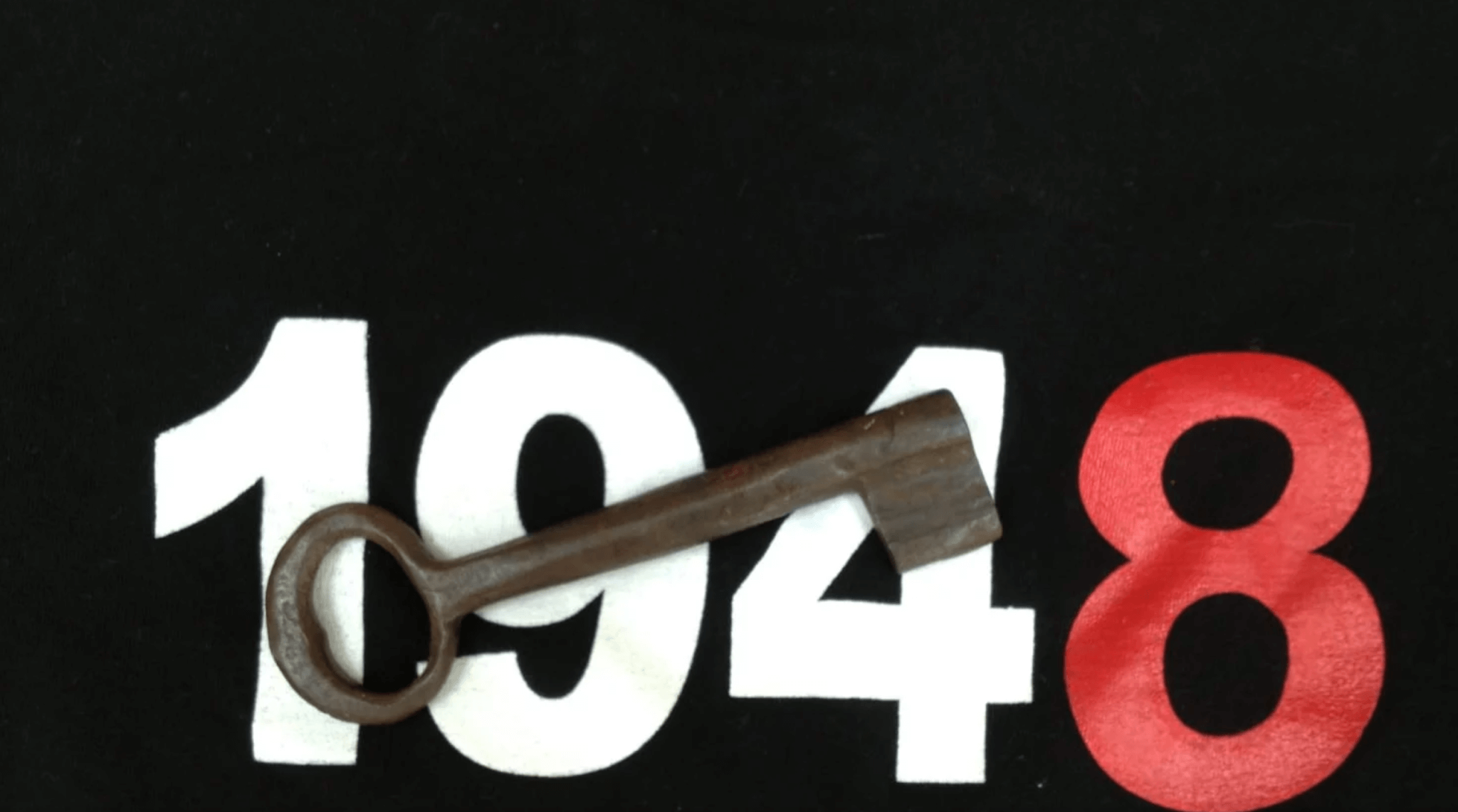 Article originally written for The Daily Beast, published on May 15th, 2013.

A rusty, iron key to the past sits on a windowsill in my home. Three years ago, when the man I married left the refugee camp he was born and raised in to move to The States, this clunky key came with him. It is his prize possession. The key opens the door to a house that no longer exists, in a village that no longer exists called Dar Abayn. Dar Abayn is located underneath present-day Mahseya, which was founded by Israel in 1950, two years after my refugee’s grandparents fled their farming village and began the trail of tears that led them to Dheisha Refugee Camp in Bethlehem. Six decades later, and older than dirt, they have never given up hope that they will someday miraculously return. That hope is symbolized by the keys they carry to this day.

Dar Abayn is one of the over 500 villages whose name is remembered by Palestinians on Nakba Day 2013. Now in its 65th year, Nakba Day has become a global event, making it a challenge for Israel to escape a history it would much rather forget. It is not a celebration, but a commemoration of all the cities and villages that were depopulated to make room for Israel in 1948, and the folks who lost everything in the process. My village, Deir Debwan, is not one of those villages. Nestled in the hills near Ramallah, we still exist. I like to tease my refugee husband by claiming that we weren’t yellow-bellied and didn’t run and get displaced like his people. We also weren’t being massacred and chased at that time, because my people lived on the right side of the Green Line. While hundreds of thousands, on the wrong side, ran for their lives during the original Nakba, some 150,000 Palestinians in grave danger held strong and refused to leave. They and their offspring now comprise the over 1 million Palestinians who hold Israeli citizenship.

While some Israelis acknowledge the harsh reality of the Nakba, most seem to have severe issues with it. The Nakba deniers are a fun bunch. They claim Palestinians didn’t exist; that there was nothing there before Israel made the desert bloom and these so called refugees were just marauding gangs of Arabs that rushed to the empty land, when they heard the Jews were moving in. I like old people. They love to tell me their stories and I’ve talked to a bunch that fled during the Nakba. They most certainly did exist. They had communities, businesses, schools, fashion sense, and farms and they lost everything except those darn keys. As much as Israeli extremists like to deny it, the Nakba most definitely did occur and there are pictures to prove it.

Then, there are those that don’t deny the Nakba went down, but believe the Palestinians were asking for it. They claim that had the greedy Arabs just accepted the U.N. Partition Plan, and quietly packed up and moved out, none of this would have happened. They blame people who had no idea what the future held, for not accepting an indecent proposal. Find me a population that would. If the United Nations decided that Native Americans had a right to declare their born again nation on more than half of Arizona, would everyone in Phoenix agree to just move to Detroit without a fight? I think not. Nevertheless, these folks believe Palestinians have no one to blame for the Nakba but themselves.

There are also those who acknowledge that the Nakba was too bad and so sad; but feel that its time for the Palestinians to let go of the past and get over it. Finally, there are Israelis that don’t think the Nakba was catastrophic enough. Their goal is to finish the job by pushing out the last of the Palestinians from Judea and Samaria into the sea, or at the very least into Jordan. They don’t believe Palestinians deserve to live in the West Bank at all, let alone be breaking the Guinness Record for building the world’s largest key on Nakba Day.

The word Nakba itself is also controversial. Israel sought to ban the use of the word in text books and attempted to stifle Nakba-related activities on Israeli university campuses. The government is very perturbed by the meaning of the word Nakba. It means “catastrophe” in Arabic and Israel can’t understand how her founding and the creation of 700,000 refugees, plus endless conflict, could be labeled so harshly. They seem oblivious to the fact that one man’s joy can be another man’s pain. Divorce is the perfect example of this. The spouse dying to escape is overjoyed when the divorce papers are finally signed. D-day is like Christmas. It’s a chance at a new beginning, where anything is possible. But for the one who was blindsided when the papers were served and had no intention of ever signing, D-day is a catastrophe. If the partition was a divorce settlement, Palestinians got totally screwed, with the majority of their assets going to the home wrecker.

I’ve never been a fan of Nakba Day because the reality is, it wasn’t one day. The Nakba is far from over and still going strong. Palestinian Jerusalemites in Silwan are being pushed out of their homes to build a Holy Land theme park. Villages like the one my parents hail from, that remained untouched through the Nakba, the wars, and two intifadas, are now being threatened with extinction as the settlements surrounding them grow and multiply. House demolitions are on the rise from Beit Hanina to Lyd. Palestinians continue to be expelled from their native lands, just as they were from 1947 to 1949 and again in 1967. They are being forced into open air prisons to make room for Israel’s wall, religiously-exclusive housing, and armories. It is a slow bleed and every Palestinian fears they will be refugeed next or even worse, again as they were in Jenin, Nablus, and Gaza. Palestinian refugees in Lebanon, Kuwait, Iraq, Egypt, and Syria have also suffered second displacements or far worse fates when their reluctant host countries were ravaged by violence and war. They too remember the Nakba on this day.

UNRWA may be downsizing their operations in the Palestinian territories, but the refugees aren’t going anywhere and they are multiplying like bunnies. It does not matter that Mahmoud Abbas and his cronies are willing to give up the right of return or that Benjamin Netanyahu demands it, the millions of Palestinians that commemorate Nakba Day every year, and every day, will not go along with it. Forget about dividing Jerusalem, the refugee issue and the right of return is a sty in the eye of the two-state solution and currently no one seems to have an effective prescription.

If tomorrow, Palestinian refugees were given the right of return, many who have made a life for themselves or were born in the diaspora, would not come back. Instead they would opt to be justly compensated for their loss. The millions languishing in the camps from Khan Younis to Ein el Hilweh, and those being expelled daily, are a very different story. They are steadfast in their desire to return. Most of the dinosaurs, who carried the keys of the houses they were expelled from, also carried their dreams of going back home to their graves; but their descendants who inherited those keys and their refugee status, have not let go of the illusion that someday they will return just like Grandpa promised they would. On Nakba Day, my refugee sits in the diaspora holding a key to a house that no longer exists, refusing to let go of it no matter how much compensation he is offered. He cannot be bought because for him, and millions of Palestinians like him, there is simply no place like home and the right to return is priceless

PrevPreviousWhat Hawking and Jerusalem Day Have in Common
NextThe Next Arab Idol: Palestine’s Boy Wonder and Stereotype BusterNext
< See all of my posts