What Hawking and Jerusalem Day Have in Common 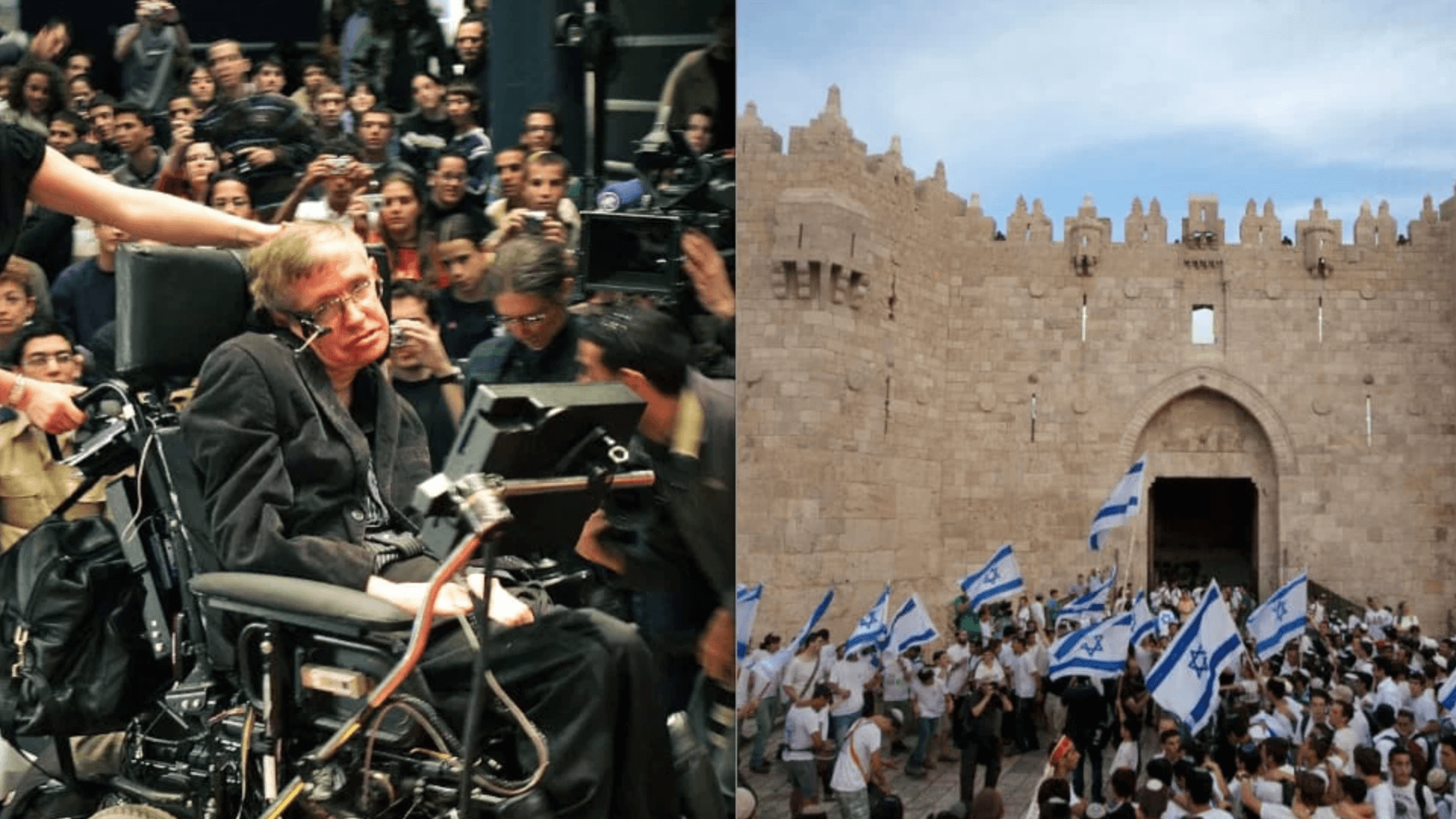 Article originally written for The Daily Beast, published on May 13th, 2013.

On May 8th, Israelis marked the 46th anniversary of Jerusalem Day. For those of you unfamiliar with the holiday, this annual love fest features angry mobs of Israelis of all ages, marching through the streets of the Old City in celebration of the reunification of Jerusalem. I have often wondered if part of the reason they are so angry is because, deep down inside, they know Jerusalem is nowhere near united.Some of the fun-filled activities to partake in on Jerusalem Day include: blocking the entrances to the Al Aqsa Mosque, the Dome of the Rock, and the Church of the Holy Sepulcher; bullying Palestinian shops in The Old City into closing; canceling the Muslim call to prayer; and running hog wild through the holiest of cities shrieking lovely epithets like, “Die Arab Die!” and random facts like “Mohammed is dead.” How’s that for unity?

Need more hate in your parades? Join the storming of the Damascus Gate and be sure to wear your most offensive t-shirt. May I recommend the one featuring a picture of the dome from The Dome of the Rock being demolished by a Caterpillar bulldozer? It’s a fashion risk, but also an incitement must.

Jerusalem Day 2013 was a feel-good romp that ended with several Palestinians arrested, a gaggle of protestors beaten down, and one Mufti randomly detained for six hours. Is this a snapshot of what the future holds for Palestinians living in an “undivided” Jerusalem? A life of inequality where their shops are arbitrarily closed so bigots can frolic, where prayer calls and church bells are silenced on a whim, and where the omnipresent Israeli Army provides cover for the thugs who harass them? It sounds like paradise. Why wouldn’t the world want that instead of a mixed city where all can worship and buy useless tchotchkes freely?

As I was scrolling through the Jerusalem Day hashtag on Twitter, the words “Stephen Hawking” caught my eye. I first assumed he was dead, so I immediately clicked to see why the George Clooney of disability’s name was trending worldwide. It turns out that Stephen Hawking was alive and well, though many wished that he wasn’t. Hawking, who’d visit Israel in the past, had just confirmed that he was coming out loud and proud for BDS and would be skipping the Israeli Presidential Conference in Jerusalem. An abliest firestorm erupted on Twitter, the likes of which I haven’t witnessed since Oscar Pistorius’ deadly fall from grace. Posts on social media suggested that Hawking’s decision to respect Palestinian academics’ call for the boycott of Israel should be punishable by death. According to the haters, he was pretty much already dead anyway, being old and disabled and all, and it was definitely time to put him out of his misery. The twits on Twitter were quick to suggest unplugging Hawking. I’m not sure what they want to unplug him from or what they imagine the result would be. He is not a refrigerator. He has Lou Gehrig’s disease (ALS), and unplugging him will not kill him. Sorry to burst your bubble.

Hawking was instantly branded a “hypocrite” by the peanut gallery. As punishment for his transgression, they wanted to not only deny his right to free speech, but also his ability to physically speak at all. You see, Stephen Hawking uses a thingamabob to vocalize that has Intel’s technology inside, and Intel has a company branch in Israel. According to his critics, if Hawking wanted to boycott Israel, he’d have to boycott all or nothing. That included Intel and McDonalds. If he was going to bite the hand that freed his voice, they believed Hawking should have that voice taken away. His detractors demanded he pop out the Intel chip in his communication tablet and be silenced forever. The Give Up Your Chip Crew believed that, without Israel’s technological miracles, Stephen Hawking would just be a sack of protoplasm slumped in a chair; he should just shut up and say thank you. There’s no evidence the technology Hawking currently uses is made in Israel. If for some insane reason, though, Intel did choose to punish him for standing with BDS by denying him access to their technology, I’m pretty sure that Apple would be happy to pick up the slack. Siri, meet Stevie.

Originally, Hawking had planned to attend the conference as well as visit with professors at several Palestinian universities. I am always begging friends, acquaintances, and audiences to visit Palestine, and I cannot tell a lie—I would have loved for Hawking to go to the West Bank followed by a film crew. They could have live-streamed him getting tangled in the turnstiles while attempting to maneuver the checkpoints between Bethlehem University and Birzeit, proving that even Israel’s miraculous technology is no match for their disabled un-friendly checkpoints.

Hawking’s withdrawal from the Israeli Presidential Conference received such a vitriolic response that I imagine he is certain that he made the correct calculations in choosing to stay home and catch up on Downton Abbey. Those that did not want him unplugged or silenced resorted to calling Hawking every disabled slur in the book—from “gimp” to “cripple” to, my personal favorite, “spaghetti brains.” Instead of challenging his politics or his ideology, they kept it classy and went straight to the “retard” jokes. The physically disabled have a long, brutal history of being treated as mentally inferior. It’d be a challenge to find a kid with a disability who hasn’t had that slur thrown his or her way. Watching “the man who invented time” be called a retard was a painful trigger to so many of us.

One of the world’s greatest minds was robotized, dehumanized, and reduced to a simpleton. Hawking had committed the ultimate sin in boycotting Israel, which meant that all bets were off. Like Stevie Wonder before him, his disability was now fair game. Ableists made sure we all knew from the memes they whipped up that the renowned physicist needed help “wiping his ass,” so he couldn’t possibly have penned the statement explaining his decision to boycott all by himself. Hawking was painted as a poor invalid in his golden years, controlled and exploited by nefarious Palestinian puppeteers. The attacks on Hawking’s physicality, which he has no control over, were shameless attempts to undermine his dignity and prove that his endorsement of BDS was meaningless and therefore in no way a coup for the movement.

From chants of “The Dome! The Dome! The Dome is on fire!” at Damascus Gate to Tweeters suggesting #StephenHawking be rolled down Masada with no brakes on his chair, hate was the star of Jerusalem Day. I suggest that next year the Powers that Be turn it into a day of service. Because, in its present state, Jerusalem Day highlights not the mythical reunification of Jerusalem—but the loss of her soul.

PrevPreviousBarbara Boxer: Withdraw Your Biased Bill
NextNo Place Like HomeNext
< See all of my posts