The Next Arab Idol: Palestine’s Boy Wonder and Stereotype Buster 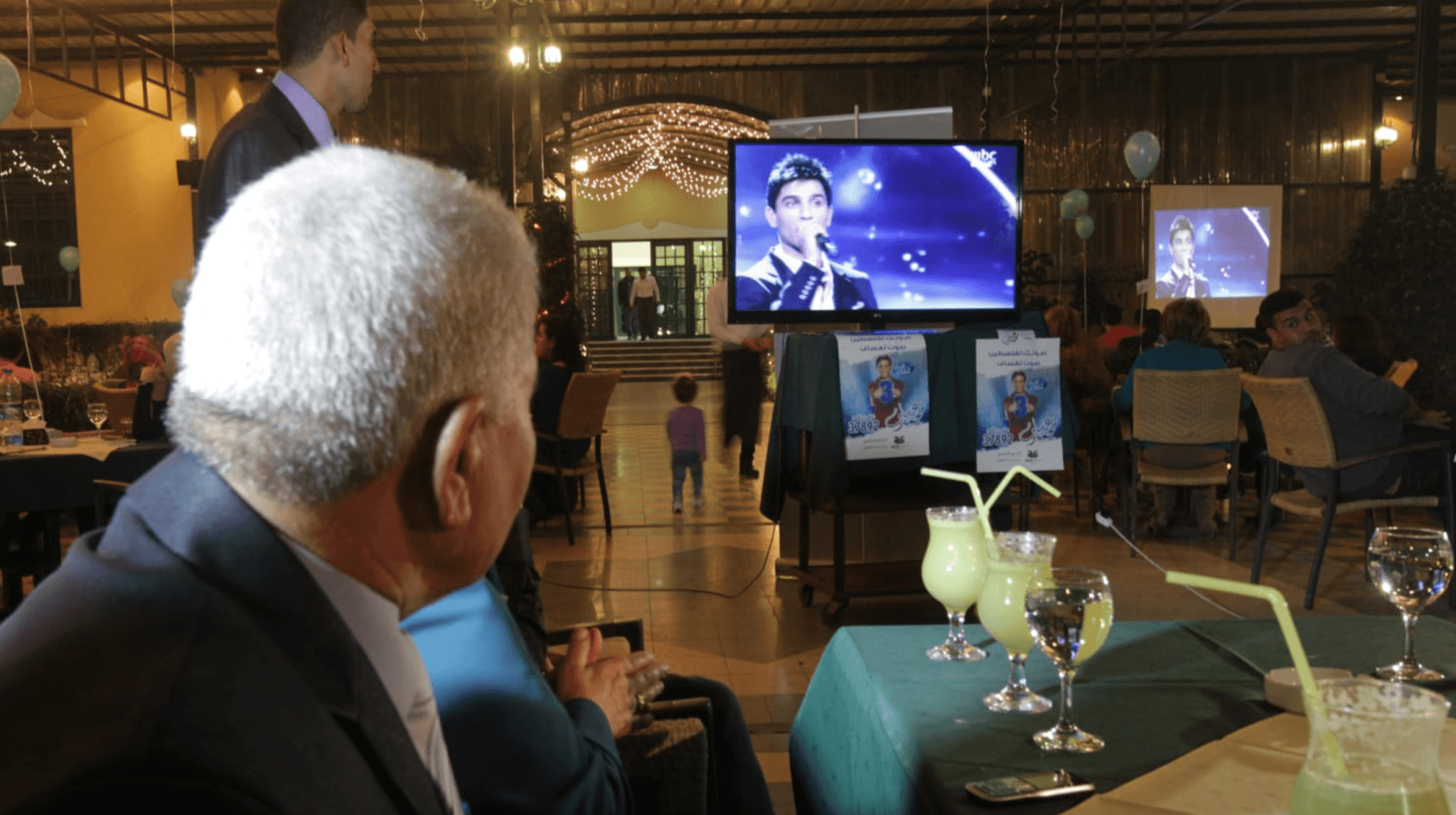 Article originally written for The Daily Beast, published on , 2013.

A phenomenon is sweeping the Middle East. Arabs young and old are voting in record numbers—and this time it’s not for the Muslim Brotherhood. Armed with nothing but their cellphones, they have set aside their differences and united to watch and vote for the next Arab Idol.

If Pan-Arabism died with Jamal Abdel Nasser, the Arab incarnation of the Idol franchise has officially resurrected it. Now in its second year, Arab Idol is a bizarro version of American Idol in its glory days, when Simon Cowell would berate Paula Abdul as she slurred and slumped in her chair. The Idol of days long gone by, that launched the careers of future megastars like Kelly Clarkson and Carrie Underwood. I am a huge Arab Idol fan, not because I love cheesy covers of the Egyptian Songbook, but because it defies every single orientalist stereotype. The judges’ panel is made up of legendary Arab superstars from a variety of countries and faiths: proof that not all Arabs are Muslim. The two men and two women sit right next to each other on the panel and the audience is mixed too, because except for the lunatic fringe that is how we roll in the Middle East.

Ragheb Alama, the Lebanese Elvis who lived, plays the Simon role and anchors the judges’ table. Unlike Simon, he is a charming, masterful mentor and a singing legend. The two female judges, Nancy and Ahlam, look like the Real Housewives of the Middle East. They are Dolly Parton meets Cher. Loud and covered in diamonds, they are the antithesis of the oppressed Arab woman—the one that’s veiled in black—that the Western media fixates on. Nancy and Ahlam are scantily clad and forego the hijab, but it wouldn’t be an issue if they chose to wear one. Anything goes in the world of Arab Idol. Rounding out the panel is Egyptian Producer, Hassan El Shafei. He’s the Randy Jackson of this crew, so there’s really not much else to say about him.

This year’s competition included singers from Saudi Arabia, Tunisia, Syria, Iraq, Egypt and many more, but the voice representing Palestine soared above the rest. His name is Mohammed Assaf and he is the undeniable breakout star of Arab Idol 2013. He is the Palestinian Justin Bieber meets Josh Groban with a dash of Tony Manero from Saturday Night Fever. Like Bieber, Assaf was discovered when he was still knee-high to a grasshopper. At the age of eleven, he phoned in to a Palestinian public access TV show and sang for them live. He has been a local sensation ever since. A decade later, Assaf decided to leave his life as a wedding singer behind to pursue his dream of becoming a superstar.

Mohammed Assaf is more of an underdog than the New York Mets. Having witnessed massive invasions by the Israeli army of his refugee camp in Gaza, Mohammed defied the odds and reached his twenty-first birthday without being killed, maimed, or indefinitely detained. Desperate to share his voice with the world, he set out to audition for the second season of Arab Idol.

The story of how Mohammed Assaf got to audition in Cairo from Khan Younis is the stuff that episodes of Glee are made of. As the legend goes, Mohammed had to beg and bribe the Egyptians, at Rafah crossing, to let him out of Gaza and into Egypt. His incredible journey spanned two days and when Mohammed finally arrived in Cairo, he was too late. The gate was closed. Devastated, he called his mom to tell her he was coming home. Like a true stage mom, Entisar Assaf wasn’t having it and wouldn’t allow her son to quit. She told her child that coming home was not an option and to get his singing self over that gate by any means necessary. Apparently, all Palestinians have an inner Spider Man and scaling walls is child’s play.

Mohammed obeyed his mama and hopped the wall. Once inside, our hero faced another roadblock. He didn’t have a contestant’s number and no number means no audition. He had come too far to give up now, so like a scene from a Broadway musical, Mo spontaneously broke out into song right in the middle of the gaggle of people waiting their turn to audition. He sang his heart out. A man from the crowd stepped forward and handed Assaf his audition number. He told Mohammed that he was just there clowning and that Mo had a real shot and could have his spot. The kid from Gaza had finally caught a break.

Mohammed Assaf walked out on the Arab Idol stage and belted out the same song he had sung a decade earlier when he called into that local TV show. He instantly captured the judges’ hearts with his stellar voice and heartthrob swagger and was chosen to move on to the next level of the competition. Shot in Beirut, Arab Idol’s second season premiered in March of 2013 and overnight Mohammed Assaf became an Arab household name. He is now a finalist and Palestinians finally have something to cheer about. They are also determined to win this. From Jordan to New Jersey, Palestinians watch and vote religiously for their hometown boy wonder. We are eternal losers and this young songbird from Gaza is our one chance at redemption. Everybody in Palestine loves Mohammed Assaf. I cannot find a single hater. Even Hamas, who ruins everything and initially objected to the use of the word Idol in the show’s title and its golden calf shaped trophy, backed down when they couldn’t resist the urge to sing along with the Palestinian boy.

He is the great Palestinian hope and a much-needed distraction from their wretched daily lives. Billboards and posters of Mohammed Assaf, looking like a 1970’s toothpaste ad, cover the graffiti on the walls of the West Bank and Gaza. He is a bonafide star, representing his homeland by belting out nationalistic tunes and making women everywhere swoon when he croons Abdel Halim’s classic love songs. Not just the Palestinians are voting for Assaf. His fans know no borders. Odds are Mohammed will win Arab idol, but it isn’t a sure thing and he’s got some stiff competition.

By any other reality show standard, his story of triumph alone would make him unbeatable. However, this is Arab Idol and so many of the competitors have lived through unspeakable horrors of war. Assaf’s main competition is Syrian songstress, Farah Youssef. Farah’s bus was ambushed on her way to Cairo from Syria and like so many other contestants she has lost several friends to the pervasive violence. These contestants are products of an Arab Spring gone terribly wrong. They have survived nightmares and truly know why the caged bird sings.

Mohammed Assaf is the face of the Palestinians that Netanyahu and friends refuse to admit exists. He is Muslim, but not radical. He is owned neither by Hamas nor Fatah and represents not just Gaza but Palestine as a whole. He humanizes a generation of males who have been reduced to terrorist caricatures. He has parents who obviously love and support him, the antithesis of the fabled Palestinian parents who want their children to die martyrs, and he has fan girls. Arab girls of all ages are in love with Mohammed Assaf and they are not afraid to Tweet it. Nor are they in danger of being “honor”-killed by the men in their families for doing so.

This boy who grew up in an open-air prison managed to escape and show the world that, just like the rest of humanity, Palestinians have dreams. Assaf’s voice has become the voice of Palestine. Win or lose, he is proof that we do exist and that there ain’t no mountain high enough and ain’t no army strong enough to keep Palestinians from making their dreams a reality—especially when that dream is of being crowned the next Arab Idol.