Welcome To Palestine: What’s Your Faith? 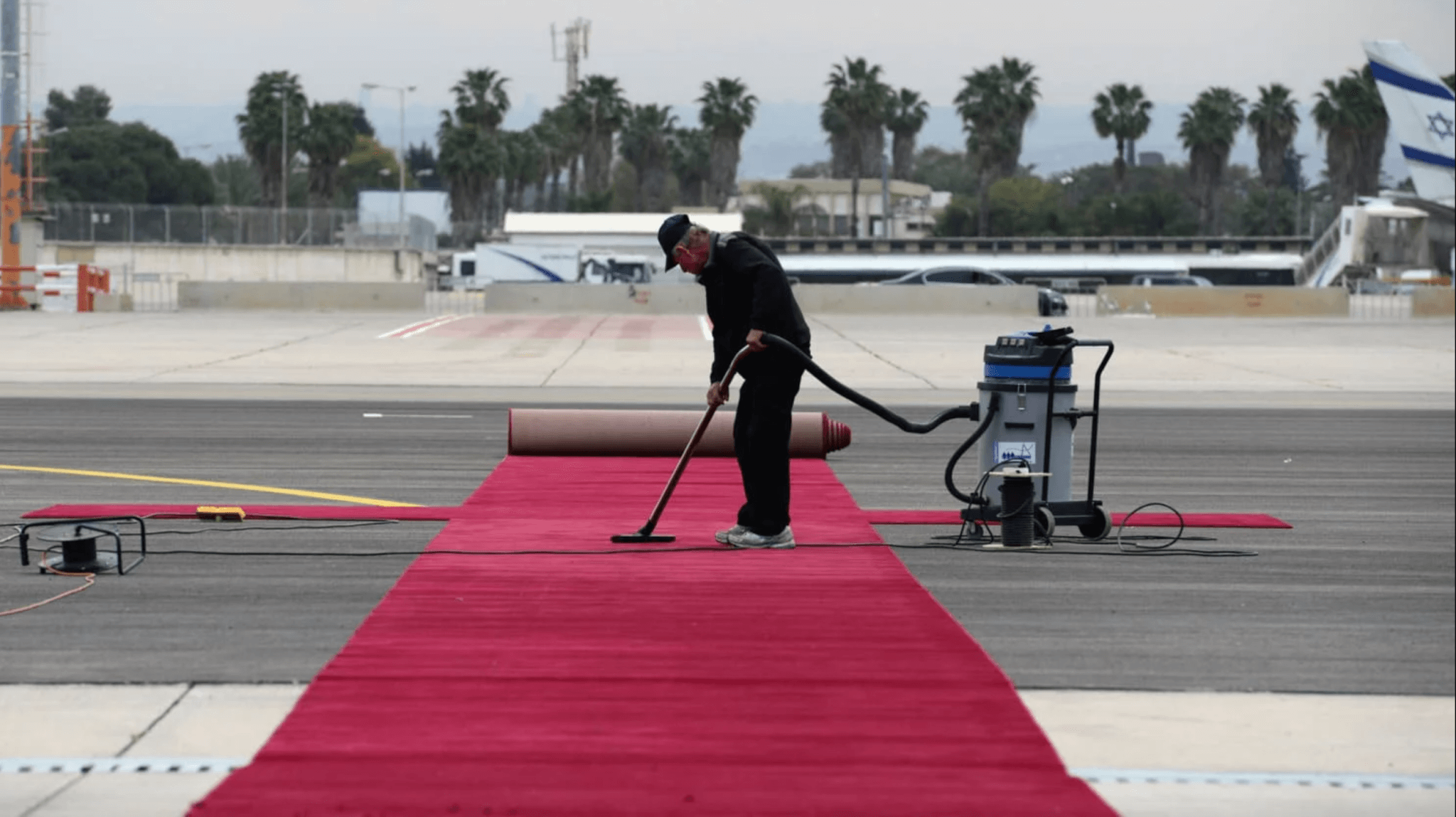 President Barack Obama is going to Bethlehem for Easter. When I heard this my ﬁrst instinct was to book a ﬂight from Newark to Tel Aviv to join him. My apartment in Bethlehem (Palestine, not Pennsylvania) is a stone’s throw away from where the President of the United States will be on his ﬁrst ofﬁcial trip to the Holy Land and who better to guide him than me, his former delegate? His guide, in reality, will be some corrupt, Palestinian Authority puppet. But if I were be President Obama’s guide, this would be our itinerary:

We would begin our trip by having POTUS forego Air Force One to join me at customs in Ben Gurion airport. Here could witness how U.S. citizens are discriminated against, depending on their faith, from the moment they step foot in Israel. For giggles, I’d let him call the U.S. embassy for help. They could inform him they won’t help him because although he’s POTUS, he’s still the wrong religion. The airport is in Tel Aviv and I know that POTUS “wishes he could wear a fake mustache and roam around Tel Aviv.” I would never let him do this. I’d explain to him, as we drove past Jerusalem, that it’d be far too dangerous; then educate him on the violence and hate crimes endured by the African population living in Israel.

Our ﬁrst stop would be to the heart of segregation, Hebron. We’d stroll down Shuhada Street and he could see with his own eyes what settlements really are–religiously exclusive housing. I’d explain that, although I was his delegate at the 2008 DNC, I no longer support the president because his veto of U.N. resolution blahblahblah endorsed, excused, and encouraged this horror. He could see how lovely the supremacist settlers are. How they throw garbage/feces and spit at the natives who happen to be the wrong faith. He voted to protect hate, bigotry, and supremacy; so he should enjoy it.

Continuing our lesson on modern day segregation, or apartheid, or bigotry or whatever you choose to label this, we would jump on the bypass road, and head to Jerusalem. Just kidding! POTUS needs to live like the Palestinians do, so no paved roads with trafﬁc lights and a direct route to Jerusalem that the settlers enjoy. Instead, he’d get to take the Palestinian’s road with me. I’ll drive, because it’s super dangerous. The roads are narrow and the curves are meant to be killer. Here he can get his ﬁrst taste of a checkpoint. We’d be stuck there quite a while, so it’d be a good time to explain to him that Palestinians are forced to carry Israeli-issued IDs that state their religion.

They have no choice in what that religion is–so even if you’re an atheist (many Palestinians are: how could you not lose faith in God living here?) on the ID’s atheist is not an option. You are what your parents are. Oh and if your mom is Christian and your dad is Muslim, the ID will say Muslim. Even if you identify as Christian, like POTUS does, by Israeli standards, he’d still be tagged Muslim. (I promise not to tell the Tea Party.)

Once we ﬁnally pass, we’re not going to Jerusalem, we’re going to go to Ramallah. Why? Because guess what POTUS, Palestinians are not allowed in Jerusalem unless they live on the other side of the green line–not even Palestinians with American citizenship. If you were born here, Israel doesn’t care that you became an American. You’re still the wrong faith. No Jerusalem For You! Ramallah is the bubble and POTUS can ﬁnally have some fun. Assuming Israel hasn’t shot and killed a teenager that day, I’d take him to party in Ramallah because no one knows how to party like Palestinians. We’d go to my favorite club and I’d point out the members of the Palestinian Authority who are spending his paltry aid money on whiskey. Then I’d introduce him to my LGBT friends to show just how ridiculous Israel’s “pinkwashing” campaign is. I wouldn’t bother introducing him to Abbas, Hamas, or anyone else in the Palestinian leadership because he’ll already be meeting with the Israeli government, who are the actual rulers.

Party’s over, time to hit up the refugee camps. Welcome to our version of the projects. Here he’d get to talk to a real-life refugee. She’d explain to him that it doesn’t matter if the right of return is given up in negotiations because millions of refugees won’t accept it. I’ll take him to another refugee and have that guy explain how he sneaks into work inside Israel every day, and that the wall is a vile joke. If it was for security and not just a land grab, thousands of illegal workers wouldn’t be in Tel Aviv daily. Our last stop in Refugee Land would be to my best friend Kareema’s house for an amazing home-cooked, authentic Palestinian meal. Over lunch, we could tell POTUS all about Kefah, Kareema’s thirteen year-old son who was shot through the chest, unarmed, by an Israeli soldier, and how she managed to go on being an amazing, widowed mother to her ﬁve surviving children.

There’s still more to see in the cage known as “The West Bank” so on to the next. I grew up spending my school days in sunny Cliffside Park, New Jersey, and my summers in Deir Debwan, the village my parents were born in. Villages and farming are also the heart and soul of Palestine. I would take him to the cemetery in my village and show him my great-grandmother Hamda’s tombstone. Her date of death was 1904, in case anyone needed proof that we existed before 1948. My village is one of the lucky ones, so we’d quickly move on to Budrus and Bilin so folks there could tell POTUS about how they too are hosed like civil rights marchers were, but with sewage, not water.

On to the Church of the Nativity, where POTUS could meet with his Christian brothers and sisters for Easter. They could share how Palestinian Christians are not allowed to walk the Stations of the Cross on Palm Sunday or light a candle at the Church of the Holy Sepulcher and that they suffer the same persecution as their Muslim neighbors.

Later, we’d grab a coffee by my friends Allegra and Abed’s house. She’s an Israeli-American lawyer and he is a Palestinian refugee. They are married with four kids and live in Bethlehem. It would be illegal for them to wed in Israel and neither Israel nor the U.S.A. will allow them family reuniﬁcation; yet here they peacefully coexist. See POTUS, it’s not about hating Jews; it’s about wanting equality.

I know POTUS would love to see Jerusalem and I’m dying to take him to pray with me at the Dome of the Rock; alas I’m here to give him the authentic Palestinian experience, so we’ll have to skip it. Time to head back to the airport. Enroute we’d chat about the Palestinians living in Haifa, Nazareth, Lid, Tershiha, etc. You know, the Palestinians everyone, not just Newt Gingrich, pretends don’t exist. The over 1.2 million people ignored by the long dead “Two-State Solution.” These Palestinians live inside the green line. I’d like POTUS to meet one of these Palestinians so that they could share their experience living in Israeli democracy as second-class citizens, denied everything from housing to jobs. He’d undoubtedly come to the realization that equal rights, regardless of what fairy tale you follow, is the solution and that U.S. tax dollars have been funding crimes against humanity. Even if he was too yellow-bellied to admit it, he’d know that if everyone from the Jordan River to the Sea was given equality, regardless of faith, the conﬂict would be over. It really is that simple. When segregation and apartheid ended, it wasn’t easy. One state won’t be perfect and it will take time; but anything is better than massacres and millions being denied equality because they are a demographic threat.

For our ﬁnal humiliation POTUS can enjoy exiting airport security with me. He can watch me get stripped, have my stuff taken away, and be forced to board the plane sans carry-on. I’m an American citizen (who holds no other allegiance) of the wrong faith. I’m not allowed to play Angry Birds on the plane. They’ve even tried to take my shoes. Why? Security. Everyone knows a disabled American clown with an iPad is a security risk no one should ever take; so I’m forced to board with just a credit card and my Blackberry.

If I were given the opportunity to show POTUS the reality of the conﬂict he’s chosen to publicly ignore, I doubt it’d have any effect. He knows all of this already. Still, I remain hopeful (or delusional) that when the President sees this bigotry that so echoes the Jim Crow South and apartheid South Africa ﬁrsthand, he will choose to channel his inner MLK and stop being George Wallace when it comes to Palestine and Israel. You are on the wrong side of history, Mr. President, ﬁx it before your legacy is forever tarnished.

NextDon’t Tread On My Hair, HamasNext
< See all of my posts