Ovaries on Overdrive in the Saudi Kingdom 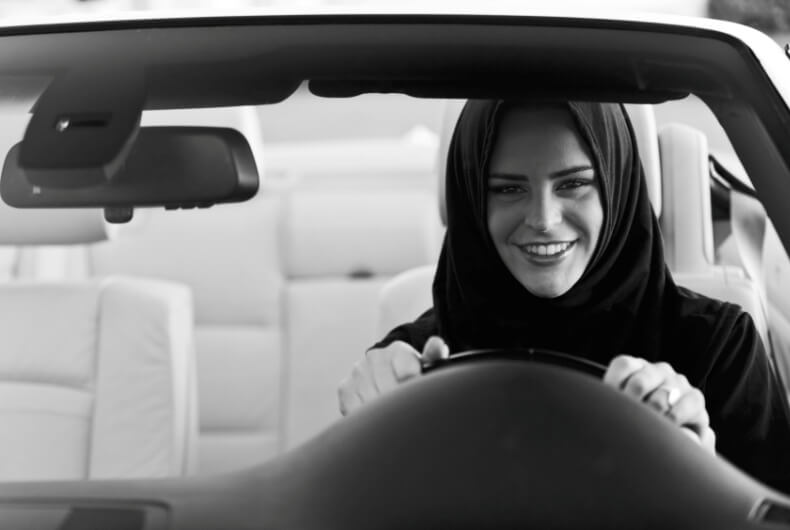 A defiant group of women have pledged online to hit the road and go for a little drive in Saudi Arabia on October 26, 2013. This is not the first time the women of Saudi Arabia have attempted to break the ban on female drivers in the Kingdom. It is a movement 20 years in the making. The first protest was held in 1991 by a group of 47 working women who drove through the Saudi capital of Riyadh and were swiftly arrested for their disobedience. In 2011, Manal al-Sharif uploaded a video of herself cruising all over the Kingdom. She got thousands of hits and inspired dozens of other women to put the pedal to the metal. Al-Sharif was jailed and forced to publicly issue a statement abandoning the movement and apologizing to the King in exchange for her freedom. But the October 26th online campaign has taken the protests to a whole new level. The activists have a website, a Facebook page, and thousands of signatures on their online petition.

The most recent quest to lift the ban on female drivers in the KSA has caused the conservative patriarchal morality brigade, which controls every aspect of the Saudi population’s existence, to panic. In an effort to dissuade ladies from participating in the planned protest, Sheikh Saleh al-Lohaidan issued a fatwathat stated women should avoid driving because participating in the activity was dangerous to the health of their unborn children. The crazy cleric claimed that medical studies proved that driving would crush the women’s ovaries, causing them to have “children with clinical problems of varying degrees.” Al-Lohaidan and his fatwa were immediately laughed off the map by Muslims, medical professionals across the globe, and even Todd Akin.

The concept of fatwas went mainstream in the Western world on Valentine’s Day in 1989, when Iran’s Ayatollah Khomeini issued one calling for the assassination of The Satanic Verses author, Salman Rushdie. The Ayatollah’s fatwa never came to fruition and to this day Rushdie writes on. The fatwa on his head even inspired a video game decades later, called “The Stressful Life of Salman Rushdie and the Implementation of his Verdict.” While there certainly are modern day fatwas that have been executed, the lion’s-share are not taken seriously and are often fodder for jokes in the Muslim community. The ovary obsessed Al-Lohaidan’s ridiculous fatwa is nothing new. It is important to understand that in Islam pretty much anyone can become a cleric, including women. They are not elected, appointed, trained, or screened. There are good Muslim clerics and there are bad Muslim clerics, just like you’ll find in any faith. There is also a big difference between the gravity of a fatwa issued by a backwoods Bahrain cleric and one issued by a government appointed grand mufti like the fatwa that forbids females from driving in Saudi.

Since any Tom, Dick, or Omar can be a cleric, it’s hard to know the difference between fact and fiction when it comes to fatwas. One fake fatwa that garnered a lot of online attention stated that women were no longer allowed to handle bananas or cucumbers because it might cause them to think impure thoughts. Another outlandish fatwa that may or may not be true declared that emoticons were sacrilegious because they imitate the human form and therefore are a form of idolatry that must be banned. Then there was the famous fatwa that stated females working alone with male colleagues should breastfeed them because breastfeeding creates a maternal bond and therefore would eliminate any in-office hanky-panky. Unlike the banana edict, this one is for real. Those seeking the right to drive even found a way to use this freakish fatwa as a weapon in their fight and began using the slogan, “We either be allowed to drive or breastfeed chauffeurs.”

Fatwas are often ignored and just empty rhetoric, but the active denial of women’s rights by the House of Saud is a reality. Females living in Saudi Arabia, regardless of their faith, must be covered from head to toe when they leave their home. Far worse than the assigned wardrobe is the fact that women in Saudi Arabia are basically owned by their male family members and must have a male guardian’s permission to say “Boo.” They cannot leave the house, have surgery, get a divorce, leave the country, or even go play Bingo with their girlfriends without having their father, husband, or whoever owns them grant them permission. This means women and girls have absolutely no free will. They can be sold into slavery or marriage, and in some cases they can be killed with their male guardians facing no ramifications. Educational opportunities and job opportunities are also limited and a woman’s right to work or attend school is completely controlled by her male guardian. The rape laws are an abomination, as is the United States turning a blind eye to the fact their ally, Saudi Arabia, is the world’s largest women’s prison.

Saudi’s King Abdullah, now in the eighth year of his reign, fancies himself a reformer. He has built new stadiums with female-only cheering sections so that women can enjoy sports while still being segregated. He granted women the right to vote as of 2015, which is huge considering that the House of Saud is an absolute monarchy and their vote is meaningless. The King recently appointed 30 women to the Shura Council, which is kind of like the U.S. Congress but even more ineffectual. Again, this is a monarchy and whatever the King says goes, even if the Shura Council is 20 percent female for the first time in history. In a bold move, King Abdullah introduced a draft resolution to ban child brides by making 16 the minimum age for marriage. The resolution, however, is full of loopholes that still allow fathers to traffic their young daughters if they can find an official to sign off on it. The Kung also introduced a law forbidding domestic abuse, a huge issue for women worldwide. The challenge here is that women living in Saudi cannot go to the police without the permission of their male guardians (who are often their abusers). The laws also don’t apply to foreign nationals. Domestic workers, who are often indentured servants or full-on slaves, can be beaten, raped, or even murdered, and their assailants will face no legal recourse.

Luckily, the misogynist cleric al-Louhaidan’s Tea Party-like obsession with female reproductive organs did nothing to dissuade protestors who planned to partake in the October 26th campaign. Will the King of Saudi, a self-proclaimed reformer, ensure the ability of women to drive safely as they embark on the road to equality—or will their quest for freedom land them in jail like those who drove before them? Only the king knows if the third time will be a charm.

PrevPreviousNetanyahu’s Iran Soliloquy at the U.N.
NextThe IDF Eid CrasherNext
< See all of my posts