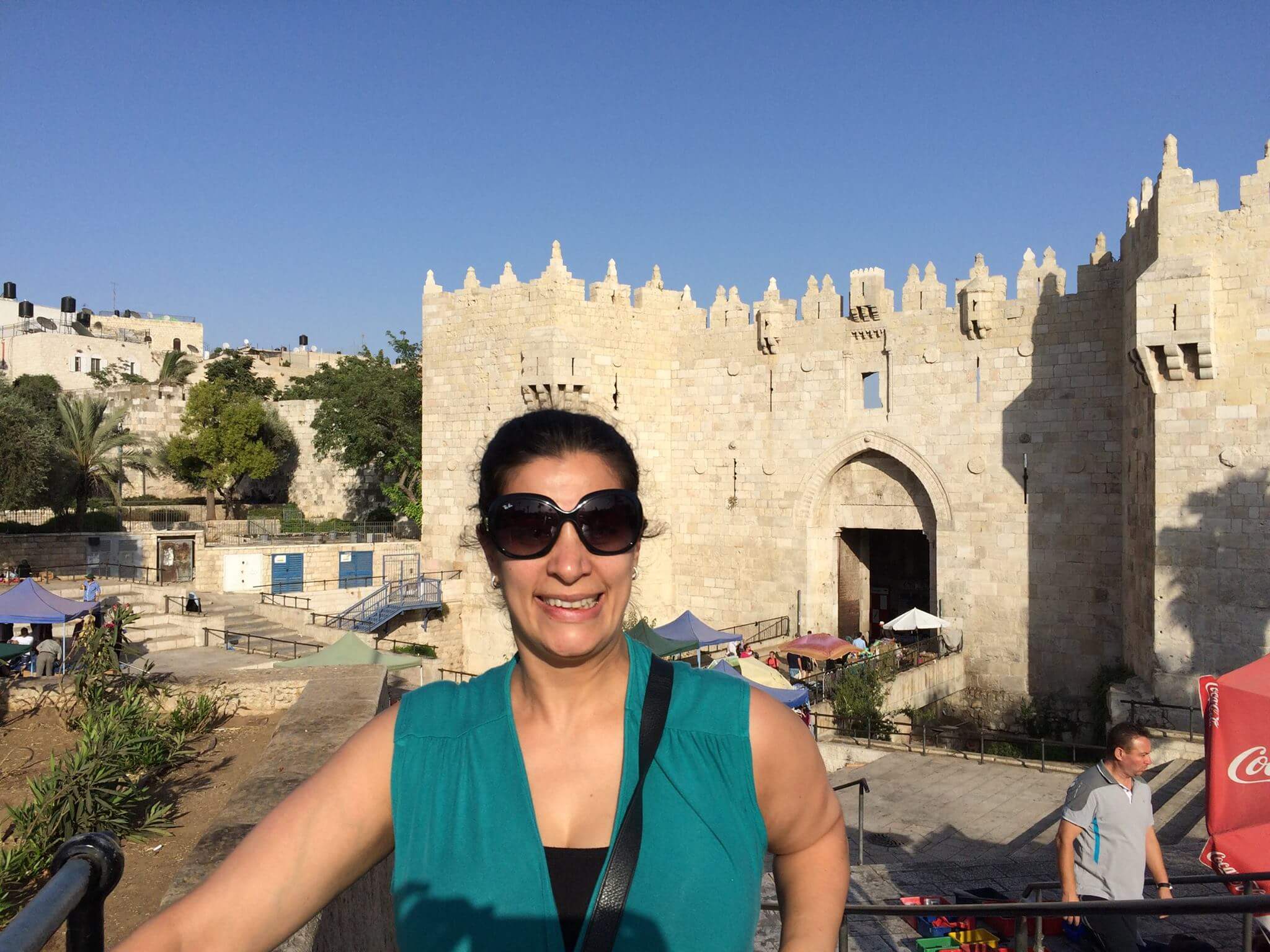 I have spent every single summer of my life hanging out in Deir Debwan, the Palestinian village both my mom and dad were born in. I was born in New Jersey and while my classmates spent their summers on the Jersey Shore, I spent mine in a war zone instead. My father was afraid that if my sisters and I did not go back to visit the motherland every year, we would forget our roots and grow up to be Madonna. Each June, my parents would put my three older sisters and me on a plane and ship us to live with our grandparents until Labor Day.

The highlight of our summer vacations in the West Bank was the nightly jaunts from our olive-tree-carpeted village to the big city, Ramallah. In the evening after dinner, we would pile into my grandfather’s green Volvo and drive to the greatest ice cream parlor that ever was, Rukab. Their ice cream is one of a kind and it is the best I’ve ever had. Thirty years later, Rukab still stands and I still love their rainbow ice cream. Unfortunately, the trip from Deir Debwan to Ramallah no longer takes 15 minutes, with Grampa driving slowly. It takes 90 minutes on a good day and up to three hours if the Israeli settlers are feeling frisky.

With the birth of the settlements came the birth of the bypass road. Israel created these roads so settlers could have access to their brand new, shiny apartments in the West Bank and so they would be able to “bypass” Palestinian neighborhoods without having to look at them. Bypass roads also conveniently create facts on the ground, and are built on confiscated land which Israel hopes to retain for all time and eternity whether it’s two states, one state, or this current state.The Israeli-only roads that crisscross the West Bank have come a long way since the beginning of the Second Intifada. The bypass roads are a system of exquisitely paved highways with traffic lights, street signs, and even street lights, while those designated for the Palestinian population are dark, dangerous detours that add miles to their journeys. Gas is $8.00 a gallon, so those forced to use these designated routes are wasting both time and money they don’t have.

Originally when the villagers started using the segregated roads, they weren’t just poorly paved, they weren’t paved at all. People who had been cut off from the city dug out alternative routes over the mountains and through the woods to regain access. The dirt roads were even more dangerous than today’s permanent replacements, but not much more. The new Palestinian roads were built by the United States Agency for International Development. USAID facilitated Israel’s unjust system of roads by building the Palestinians an alternative route so they would not demand access to the Israeli-only roads.

According to Israel, the point of bypass roads is to keep the illegal settlers safe from their Palestinian neighbors by keeping their roads separate, but unequal. The idea that these roads serve any function security-wise is bat shit crazy because the two peoples’ roads intersect at various points. This means Israeli settlers and the Palestinian locals end up driving on the same roads anyway. If Palestinians are that dangerous, then why merge the segregated roads?

There are some Palestinians who are allowed to drive on the Israeli bypass roads even when they don’t intersect with the Palestinian routes. The chosen few are the laborers who have permits to work in Israel or the settlements and Palestinians who hold Israeli citizenship, American citizenship, or citizenship in any other country Israel considers friendly. The presence of Palestinians on these roads that were meant to bypass them is proof that this system serves no other purpose than to inconvenience Palestinians while solidifying Israel’s stranglehold on the land meant to house the future Palestinian state, John Kerry insists is being created at this very juncture.

The settlers and their religiously-segregated compounds are the reason why I must now drive on detour roads, which are pothole-ridden, with death-pin curves and wild boars instead of deer jumping in front of my rental car. The road that used to link my Deir Debwan to the city was a straight shot, the alternate route is not. And I am constantly lost. Google Maps may have recognized Palestine, but the GPS still doesn’t, so you are on your own. If you make a wrong turn you are likely to bump into an armed Israeli settler who doesn’t believe you have a right to exist and is very angry you actually do. Israel doesn’t provide motorists with nice, bright orange detour signs to follow either, all you have are the Star of Bethlehem and billboards to guide you. Luckily, some of the more enterprising businesses in my village put up billboards advertising their services along the detour’s route. These smart cookies included arrows on the ads that point you in the right direction. So now, when I want to go to Deir Debwan I just follow the signs for Tina’s Salon and Star Pizza. Both are written in English which is extremely helpful. They are the yellow brick road that guides me home.

My father is buried in Deir Debwan. I live in America. I can only visit his final resting place when I come to Palestine. In my faith, we believe it brings great peace to the soul that has passed to have their loved ones sit by their graveside to read, pray or talk to them. My father was my very best friend in the world and I would like to go pray by his side daily, but I cannot. In my five days here, I have only gone once because I now live in Ramallah and the detour roads are simply too dangerous and too much to handle as a woman with cerebral palsy driving alone, even with Tina’s Salon and Star Pizza to guide me. Israel makes the journey so difficult that even privileged, Americans like myself forego the hassle and voluntarily stay in their cage rather than endure another checkpoint, detour or degradation. Fewer Palestinians on the road does not mean more security for Israel. It just means less traffic for the settlers, which will make them happy. And after all that is the entire point of the bypass roads.

PrevPreviousIsraeli Bypass Roads: Separate But Unequal
NextPalestinian Prisoners Are Released And No One CaresNext
< See all of my posts