If You Build It, They Will Skate 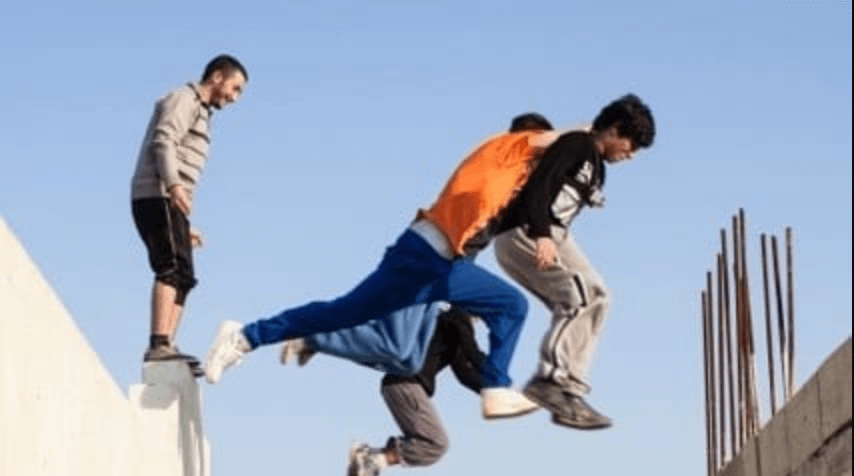 Skating may not be the first thing that pops into your head when you hear the word Palestine, but it’s the only thing 29-year-old Palestinian barber Sajed Abu Ulbeh ever thinks about. He is a man on a mission to build Palestine’s first skate park and his dream is about to come true.

Sajed’s obsession with skating began when he was just 12 years old. He had one of those cool dads who would buy his kids random gifts he encountered on his way home from work. One day, Sajed’s father brought home something that would change the course of his son’s life. It was a pair of inline skates and neither father nor son knew exactly what these whacky shoes with wheels did. Sajed fearlessly slapped on the rollerblades to give them a whirl, and a skater was born.

Sajed lives in Qalqilya, a Palestinian city located in the northwestern region of the West Bank. The city is famous for two things: the fact that the Israeli separation barrier completely encircles it and the fact that it is the home of the only official zoo in Palestine.

In the second Intifada, the Qalqilya Zoo endured a series of tragic events. During one Israeli invasion, the sole male giraffe, Brownie, got so freaked out by the live fire that he panicked and ran head first into a pole. He died on the spot and his mate, who was pregnant at the time, proceeded to miscarry due to depression. Three of the zoo’s zebras also suffocated to death due to tear gas inhalation. The zoo’s vet felt that it would be too depressing to leave the cages empty so he decided to taxidermy the fallen wildlife. They now stand frozen in time in their own special, depressing enclosure at the zoo.

Now imagine being a kid living through all that. Sajed, however, did not fear for his life during the height of the Second Intifada. He feared for his street and wondered how he would ever be able to skate it again after the IDF tanks’ treads had torn up his neighborhood.

Every night, if there wasn’t a curfew in place, Sajed would take to the streets to skate and do tricks. His fellow Palestinians did not know what to make of him. Qalqilya is a religiously conservative city and Sajed with his mop top hair and baggy clothes was a misfit, but not for long. After years of being Qalqilya’s lone skater, other teens finally joined Sajed on his midnight rolls. Those who couldn’t afford skates found other ways to participate in the street happenings that started to look more like Venice Beach or Union Square than a Palestinian reservation. What began as a kid rollerblading solo had now grown into the best show in town. Sajed and his crew call themselves the ‘X-Games.’ They rollerblade, skateboard, perform beatbox and hip-hop, and do parkour.

Parkour is the art of getting from one place to another, on foot, as creatively as humanly possible. Palestinians are born to parkour: they are masters of creatively getting from Point A to Point B, due to the plethora of obstacles Israel puts in their way on any given Sunday. I have often said Palestinians possess an inner Spider-Man and these kids in Qalqilya literally jumping over walls prove that my theory is right. If you are still unclear as to what exactly parkour is, it is best explained in this clip from the sitcom The Office, which highlights not just the joys, but the dangers of parkour.

Sajed is a skater, but he is no slacker. He owns a successful barbershop in his hometown of Qalqilya and uses the profits to fund his habit. In 2010, he used his savings to open up an indoor skate park. The venture quickly folded because the kids who came to skate couldn’t afford to pay what it took to maintain the place. The X-Games and their fearless leader Sajed found themselves performing on the streets of Qalqilya once again.

Team X-Games finally got their big break in the form of Adam Abel, a random guy from Brooklyn, who stumbled upon Sajed and his team while researching the path of the wall that suffocates Qalqilya. Abel was in the territories working on an artsy project called Terra Infirma, “an installation that repurposes images from Google Earth into photographs and video to represent boundaries as political interventions,” and apparently, the wall around Qalqilya was a perfect specimen.

Adam was itching to see the infamous barrier and to meet the mythical skate team his friends had mentioned lived inside its confines. He hired a tour guide named Mohammed Othman from the neighboring village, Jayyous, to show him the route and take him to meet team X-Games. It was love at first sight. On the day they met Sajed and his ragamuffin crew, Adam and Mohammed, who had just met each other, decided to drop everything they were currently working on, so they could team up to make a documentary filmabout Qalqilya’s X-Games.

The duo began documenting Sajed and friends in April of 2011. They followed the motley crew as they travelled the West Bank competing with other teams like Nablus’ Street Mafia, which boasts a juggler and a unicyclist, and documenting the team as they faced challenges. Like any performer, the team has had to make difficult decisions in choosing where to show off their skills. Sajed, a Muslim, at first worried about accepting an invitation for the team to perform in the Taybeh Oktoberfest. (Taybeh is a West Bank village that houses Palestine’s only beer brewery and every year hosts a run of the mill Oktoberfest.)

Sajed had worked very hard to get the members of his community to embrace skating as a positive influence on the youth. Skating had crossed over and was no longer just for boys. A tween girl named Rama, from the nearby village of Jayyous, had also joined the sport. Sajed worried that by performing at a festival that promoted alcohol, he would alienate those who had supported him.

After much debate, the X-Games decided to perform at Oktoberfest because, regardless of faith, they wanted to support their fellow Palestinians. They came to the conclusion that there was nothing wrong with performing at a beer fest as long as you didn’t get wasted.

Not all of Sajed’s risks paid off. He received much criticism on social media when he announced on Facebook that the team had accepted an invitation to participate in a skating exhibition in Tel Aviv. Sajed was accused of selling out and going to play with people who had served in an army that had killed, jailed and terrorized his neighbors. Although he understood where his haters were coming from, Sajed believed that skating in the exhibition was the ultimate form of resistance and felt that in doing so he was raising the Palestinian flag in the middle of Tel Aviv. He wanted to remind those who had built a wall around him that he existed, that they couldn’t break him, and that he was the greatest skater ever.

The Palestinian Authority didn’t give a hoot what the reasons were. They proceeded to interrogate the team. The X-Games’ reputation was tainted and Sajed was left with no choice but to cancel the appearance.

Even if you can parkour, it is hard not to feel trapped when you are stuck in an ultra-conservative town surrounded by a concrete wall that blocks out the sun. Sajed got sick of being in the cage he called home and decided to leave Palestine for more golden pastures. Desperate to be free of the occupation and social pressures, he packed up his clippers and moved to the Gulf. Sajed found success in Dubai, a hairstyling Mecca in the Middle East, but like Dorothy from the Wizard of Oz, he quickly realized there was no place like home. He hightailed it back to Palestine after just one month.

Sajed didn’t race back because he was homesick, but because he felt like there was no point in pursuing his dreams outside of Palestine when Palestine itself was such an integral part of the dream. He moved back home and opened a new bigger, better, and edgier salon. Team X-Games were reunited and it felt so good.

Sajed decided that instead of trying to escape Qalqilya, he would build his very own skate park inside its walls so he could teach the next generation to fly, since his generation had slowly started to move on.

The filmmakers, eventually, ended up becoming part of the world they were documenting. While schmoozing at the Dubai International Film Festival, Abel and Othman crossed paths with a group called Tashkeel, an organization that promotes artistic expression. They also happened to have spent the past five years building skate parks in the Middle East. When Tashkeel saw the footage of team X-Games, they decided to donate and build a skate ramp for them in Palestine.

Adam and Mohammed went back to Qalqilya, with a sack full of free skateboards and the awesome news that they had procured the first piece of Sajed’s dream skate park. The city was so ecstatic that the mayor of Qalqilya donated a piece of land to the X-Games to place their brand new ramp upon. The land he gifted them is, of course, located in the Qalqilya Zoo because with so little land to be had, where else could the ramp go?

The skate ramp is set to open in September of 2013 unless something goes horribly wrong, which is always a possibility in this neck of the woods. If all goes as planned, Sajed and Team X-Games will finally have a place to call home, inside the zoo that is caged by a wall—and maybe someday Qalqilya will be a host city for the actual, real-life X-Games. Stranger things have happened in the zoo.