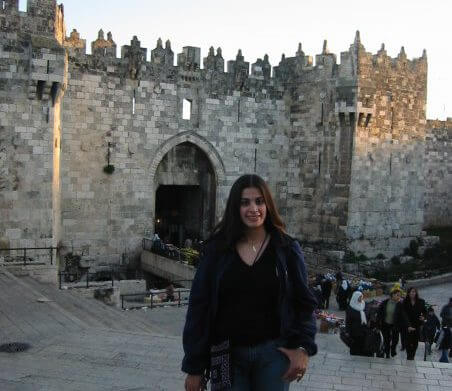 Before I ever went to Palestine, I knew Palestine. It was all my dad ever talked about. Every summer my parents would send us back to our village Deir Debwan to live with my grandparents; because my mom hated kids and my dad was afraid that if we didn’t go to Palestine every year, we would forget our roots, and grow up to be Britney Spears.

The first summer I ever went, I was five. I packed all my favorite things: my wonder women underoos, my stuffed bunny Checkers, and my most favorite thing in the world—my Michael Jackson glove. I shouldn’t have taken anything. My grandmother was like the Muslim Robin Hood—but instead of stealing from the rich, she’d steal from me and give every single thing I owned to the poor refugees. I spent days trying to explain to her that although I felt sorry for the poor starving refugees, I could not comprehend what use they would have for my sparkly glove since it wasn’t even a pair.

Having my stuff stolen by grandma and learning the importance of charity was the fun part of Palestine. The not so fun part was having to deal with the Israeli army since I was five years old. I like to call it Jersey vs. the IDF. My first run-in was with Israeli airport security. Every summer my three older sisters and I would land at Tel Aviv airport. For those of you who don’t know, there is no way to enter Palestine without crossing an Israeli border first. (Yes, I am aware of the Rafah crossing, but it’s closed, like all the time.) The Israelis would search us with a fine toothed comb because four little girls traveling alone were obviously terrorists.

I had gotten used to being strip-searched at the airport, but when I was eight I was subjected to far worse. They beheaded my bunny, Checkers. It was not self-defense. It was murder. Checkers was a blue and white stuffed bunny with a beating heart that traveled with me. The Israelis could have easily x-rayed Checkers to see what was inside of him, but instead they decapitated him and pulled out his heart. Then they handed him back in pieces. I will never forget dropping his head as I struggled to keep all his parts together. My grandmother, in an effort to console me, reattached Checker’s head. Unfortunately, the cross-stitching queen of Deir Debwan had only red thread. The result was horrifying. That would be the first of many memorable run-ins.

When I was 14, both of my grandmothers passed away, and I refused to go back. I was 22 when I finally returned. My mission: to find a husband. My cover: working with disabled orphans in refugee camps.

For those of you who’ve never been to a refugee camp, they don’t have horseback riding, arts and crafts, or roasted marshmallows. They have trash piled sky-high, sewage streaming through the streets, and narrow, winding alleys that make it impossible to tell where the shooting is coming from. And there are kids—millions and millions of bored, hungry kids. And I was going to be their Oprah. I’d bring them medicine, shoes, and Doritos, while simultaneously catching myself the most gorgeous refugee man ever. We’d fall madly in love, get married, adopt differently abled babies, and live happily ever after.

By the way, I hate kids. The first time I ever walked into an orphanage this thing ran up and hugged me with a Fraggle puppet growing out of its head. I mean, you could pet it, and it would giggle. So I decided I would work with teens. I went there like an idiot thinking I could be Michelle Pfifer from Dangerous Minds. I was going to teach them theater and they were going to stop throwing rocks. When I got there I realized these kids didn’t need art, they needed shoes.

In April of 2001 I founded Maysoon’s Kids, a not-for-profit charity funded primarily by my friends on Facebook and Twitter followers. Our mission was to address the needs of the growing population of disabled children in the West Bank.

We don’t give people money, we’re very much hands on to “teach a refugee to fish.” Due to the political climate, I am not allowed to travel to Gaza, which is why we work exclusively in the West Bank. Past projects include art and wellness programs, summer camp lunches, eye exams and glasses, Mommy classes, providing physical therapy equipment to rehab centers, tutoring seniors preparing for college, and providing shoes clothing and milk locally made for orphans.

I have seen the landscape of Palestine change drastically over the past 30 years. The beaches I went to as a child with my grandparents are no longer accessible to Palestinians. The wall was built before my eyes. I remember crossing Kalandia and having to step over the first concrete block and thinking, “Why is this here? This is so annoying.” I had no idea that only a few years later Ramallah and Bethlehem would be completely cut off from Jerusalem by this crazy thing that is three times the height of the Berlin Wall.

One of the fringe benefits of the wall is that it comes with checkpoints. Checkpoints are like being stuck on the longest line at Disney but there’s no ride at the end, and there’s a fairly good chance you’re going to encounter violence. I have been shot at at a checkpoint, but not hit. Which makes all the difference.

That was my second run-in with the Israeli army. When I first used to cross the checkpoints I was totally obnoxious and fought with the soldiers over the injustice. I mean they weren’t going to hurt a differently abled American, were they? March of 2003 everything changed. Rachel Corrie a blond-haired, blue-eyed American was run over by an Israeli bulldozer and I immediately stopped sassing soldiers.

I also spent many months living under curfew. Curfew means if you go outside you get shot. I got stuck eating peanut butter and Cheerios for three whole days once. My stomach was a mess. I am forever grateful that I didn’t have Twitter at the time because I would mostly definitely be in political prison if I did.

My most recent run-in with the Israeli army was in June of 2006. I was flying back to New York to do a show that night when Israeli security held me for three hours. I was strip-searched and left to bleed on myself in a wheelchair that I use for travel. The woman in charge who refused me access to my belongings was named Inbal Sharon.

I will never forget her name because she proudly gave me her card. I am an American citizen who holds no other allegiance. A simple Google search shows that I am absolutely not a security threat. Yet, I was forced to board the plane with nothing but my passports and a credit card and denied access to sanitary products. Onboard, the Continental stewardesses gave me their clothing. It was beyond sickening and yet I go back every Christmas, every summer, every chance I get. I have no choice.

One thing that drives me insane is the way the Palestinian-Israeli conflict is portrayed in the media. Let’s simplify the whole thing. The issue is bigotry and oppression. The solution is equal rights for everyone. The theory that these people can’t coexist is ludicrous because they already do. The majority, yes the majority, work together, study together, hitch- hike together and even date. The only issues are those who insist on religious exclusivity and, being heavily armed, denying freedom to everyone else. And that, my friends, is why they’re fighting.

PrevPreviousIf You Can’t Fast, Give
NextWedding WasteNext
< See all of my posts